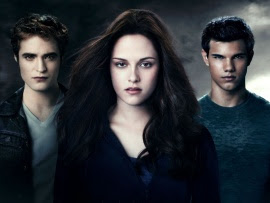 You practically have to be living in a bubble if you didn't realise everything Vampire was very, very hot right now. With the movie launch tomorrow of the third installment of the Twilight saga, Eclipse, I knew it was a matter of time before I got an enquiry at work about someone wanting something a little vampish.
I am not going to lie here, I am a fan. I came to the phenomenon a little later than most, only seeing the first two films this year & reading the third & fourth books this month. Once these vampires sink their teeth into you, it is a little addictive. I don't have a teenage daughter to hide my fanatical tendencies behind, but on merit I don't think I need one. The books are well written & easily suck you right in. I am a huge Jane Austen fan & I see much of her influence across the entire saga & Stephanie Meyer has been quoted in saying that each one of her novels draws upon a Austen novel for inspiration. 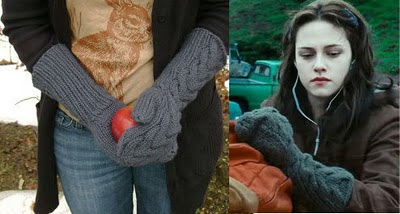 So where does the knitting come in you ask? Mittens initially. Namely those famous 'Bella Mittens'. Designed by Ruth Cross, she had no idea her mittens had been purchased by the production studio until just after the first Twilight film was released, then her website became inundated by requests for "Bellas Mittens". If you fancy knitting your own Bella-rific mittens, this a an excellent pattern available for free. 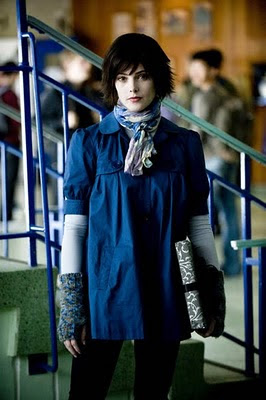 A quick Google search reveals a wealth of other Twilight inspired knits. The quirky Alice Cullen donned a pair of wrist warmers in New Moon, & another dedicated Twi-hard knitters carefully nutted out the pattern to Rosalie Cullens classic scarf.

There have also been knits that have been inspired by the saga, one of my personal favourites are these Eclipse socks, combining the film & book cover imagery. From my own designs, my Ever After gauntlets could easily translate into some Twilight-ish, I knitted a pair for our nanny Coralie in Midnight Blue, very Twilight! 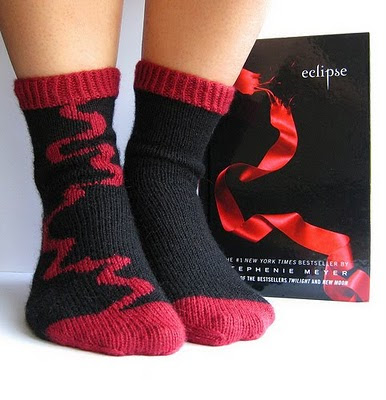 If you are a Ravelry member, just pop 'Twilight' into the pattern search & hold on tight at all that is on offer. 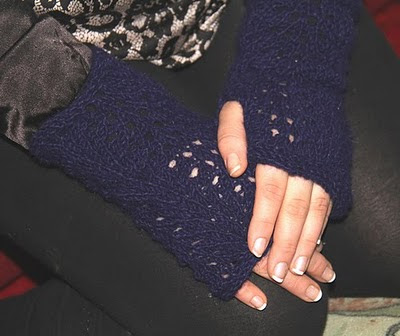 Coralies 'Twilight' Ever After Gauntlets

Am I going to the one minute past midnight screening tonight I hear you ask? Nope, this old vamper needs her beauty sleep, I'll just have to sate my blood lust with the season opener of True Blood 3 instead!

Posted by Buscke at 2:35 PM No comments:

Strike While the Dino's Hot 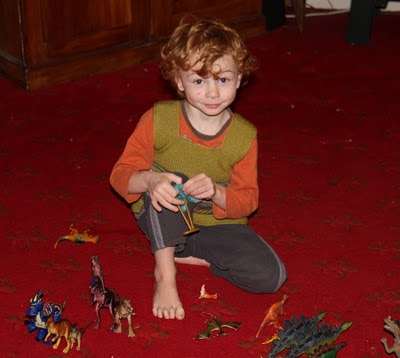 Louis, our budding Palentologist.
Louis, our 4 year old, never ceases to amaze me. He unfailing passionate obsessions often leave me wondering what is in stall for him in years to come. This week I have been coming under great pressure from him to complete his "Dino Jumper Mummy!". 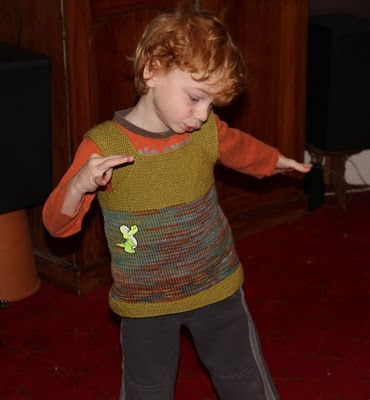 I had a motif all picked out, a cute wee purple T-Rex, so I dubbed the new project Tyranno-Milo-saurus. As I was finishing off the final rows last night Louis dug the small paper bag out with the motifs inside. I showed him the T-Rex, he also pulled out a small green crocodile (which I had bought thinking it was a dino & then realised when I got home it wasn't). He looked intensely at the jumper & announced quite emphatically, "No Mummy, that's a swamp on the dino jumper, T-Rex doesn't like swamps, better be Deinosuchus" - Eh!? What??? 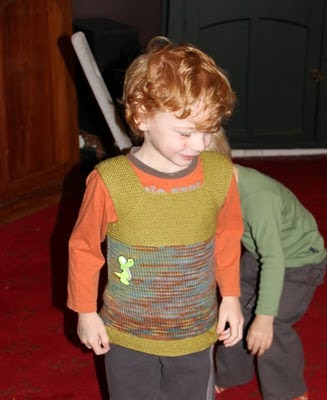 So the cute we croc has been elevated to ancient dinosaur status & I have another project that Louis has deemed suitable to grace his person. What do next? Start delving into the stash to find yarn that will go with a purple T-Rex of course!
Posted by Buscke at 11:57 AM 1 comment: 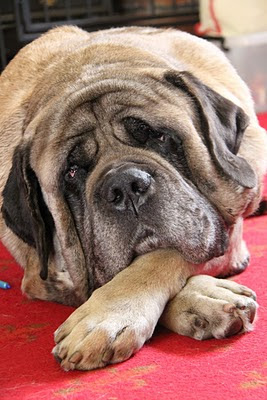 The MacBuscke house is in mourning.
Last week Benson, Maximus' father, suddenly passed away after a short illness. For those who follow this blog, you will be aware that Benson has played a big role in our lives, coming to stay frequently for doggy holidays & respite care. His gentle sunny disposition meant he fitted in seamlessly to the running of the house & the boys, Max, Dr. Phil & especially me, loved having him about. For those who are animal lovers, you will understand the almost irrational overwhelming sense of grief you feel at the loss of a pet. Madness really, I have been crying for days. Like children, pets, their innocence, just gets under your skin.
We'll miss you Benson. 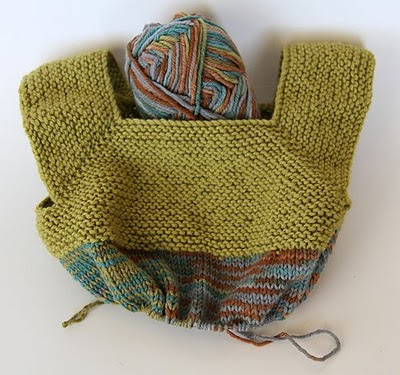 t plenty of projects in the queue. After the success of the Steggie Milo, I have started another called Tyranno-Milo-saurus, a sort of 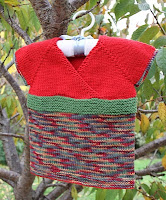 prehistoric jungle inspired number which I have a small T-Rex motif to apply one completed. I have also had a couple of birthday presents completed & with James from J.O.Y coming to visit this weekend, I feel some socks coming on.

For those who have tried the Ever after Gauntlet pattern, I have just completed a pair for Suzanne at work using a fine Merino DK & 4mm needles & they fit her smaller hands perfectly. 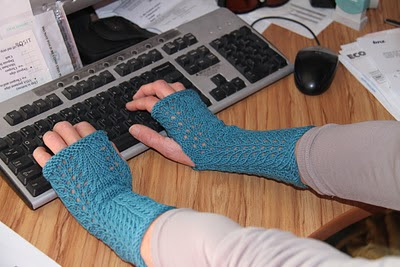 Suzanne's Ever After Gauntlets

It has been a perfect project for me to do to help support New Zealand in the Ravelry World Cup - Go the All Whites!
Posted by Buscke at 8:10 AM 1 comment:

Is there something in the air? 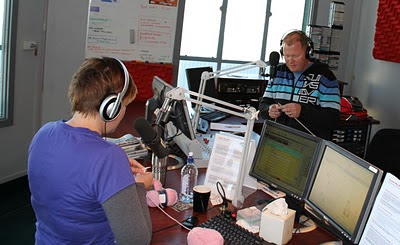 I love to get people talking, especially about knitting. This week is World Knit in Public week & today our Hawkes Bay Knitters are braving the rain & cold, sitting proud at the front of our local bakery (Heavens on Emerson Street) proudly showing off our own knitting prowess.
I too have be

en beating the knitting drum (with a knitting needle of course!) on loca

l radio. The Classic Hits 89.5FM breakfast team of Martin & Sarah embarked on a scarf knitting challenge after Sarah lamented at not being able to find a good warm wool scarf. I was hastily dispatched to there aid to assist them with yarn, lessons & a challenge - who can knit the best scarf. Two weeks later Martin came out the victor & Sarah graciously auctioned her scarf on Trade Me to raise money for the SPCA. It's amazing how some so simple gets people talking about knitting & many have been inspired to pick the needles back up again after a long absence. 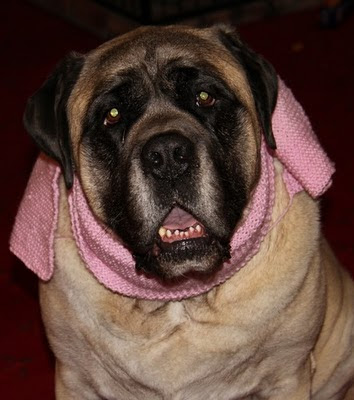 Max proudly wears Sarah's scarf
Complete with 'Lace' (holes) & colour work (coffee stains)
I have also been interviewed in the past couple of weeks by Genny Stevens from Crafternoon Tea with Granny G fame. Her weekly podcasts are a 'must do' for many knitters & I was thrilled to be part of her show & talk about what's been happening at Skeinz, knitting in NZ & the Knit August Nights retreat in August (see previous post for more information). 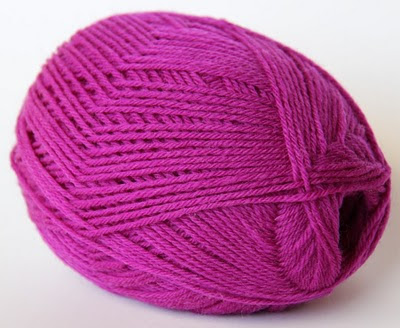 Speaking of which, registrations are getting very close to closing as capacity has almost been reached. I however can still be coerced, & to date the attendance has been very evenly spread for the workshops, which has meant I have been able to provide everyone with first choices. So at this stage it's still not too late, so email me on busckem@clear.net.nz for registration details.
My needles have been flying red hot over the long weekend. Firstly Louis LOVES his Milo, which I have dubbed, Stega-milo-saurus. It's amazing how a fickle four year old can be induced into wearing an item of clothing when you put a dinosaur motif on the front. 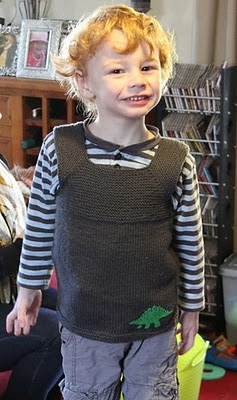 Louis sporting his new Stega-Milo-Saurus
I am also knitting two tunic's for little girls birthdays. It is a new pattern I have not tried, Oriental Lily by Georgie Hallum. So far I just love the cleaver construction & the ability to play around with colour. This pattern is available for free & is a must for your pattern library. 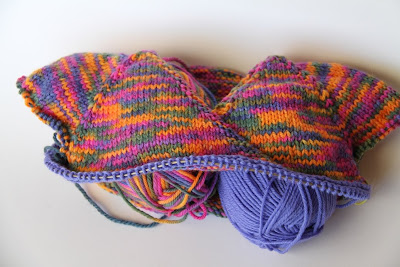 Better fly, time for me to Knit in Public!
Posted by Buscke at 10:04 AM No comments: