A Big Year for Birthdays.

This year has seen a number of significant birthdays already.  The first three months have seen my Uncle Robert, my father, & my father in law all turn 70 - a real milestone birthday.
What is best about these milestone birthdays are the chance to round up the usual suspects, friends, family & pets all to celebrate together as only a kiwi whanau can.

For me the amazing reality to these gatherings is how the whanau has grown.  My generation is now longer the junior members at these gatherings, but our children are occupying the gap that I still so vividly remember from the parties of my youth in the 70's & early 80's.  Louis & Hugo now have their own cheesy family pictures, which I can only hope they will look back on in 30 years & have the same pangs of nostalgia I am having now.
The three septuagenarian's aren't the only ones in my life having a milestone birthday - I too this month have reached a milestone of my own - I turned 40.  Whilst I have had plenty of good humoured jiving about turning another year older, I actually feel pretty bloody good about it - I have a greater self confidence I never had in my youth & certainly would not want to turn back the clock. Besides I live my the mantra that 'Fat don't Crack'.  If anyone in my life felt a little sad about me clocking over into another decade it was my father - who hasn't yet managed to reconcile the fact he has a daughter who is 40, let alone he turned 70 just a few weeks before me!
But as years clock over, new arrivals enter the whanau fold & my cousin Kurt & his wife Jules welcomed their son Zach into the world this months as well. So in good Buscke knitting tradition I knocked out a wee baby jumper for them to welcome Zach to the clan!

On the needles...
I have a busy few months on the needles.  I have finished Louis first vest for the 2012 winter & I cast on Hugo's today.  I also did the jumper for Zach above & am on the verge of finishing another similar one for a friends first grandchild due in July.  Cria is still ticking along & I have even frogged my only UFO & am reforming it into a cushion to go with the one I knitted for work a few weeks ago - nice to see the new seasons knitting get off to a rip roaring start!!
﻿
Posted by Buscke at 3:26 PM No comments: One of my bestie best friends has moved away to do a two year post graduate degree at the ripe old age of 49.  Brave ballsy move at any age, so I wanted to do something for him to have to start his new life as a 'scarfie' student. 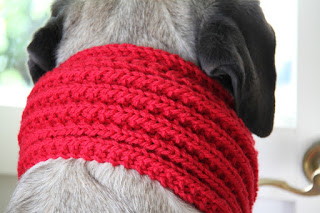 So I have knocked up this super quick, super easy 'Back to School' scarf for him. I like the length long so you can loop the scarf around your neck (as seen modelled by our dog Max).  This should keep the cold out this Winter as he adjusts to his new student lifestyle.
Posted by Buscke at 12:48 PM No comments: